Create a safe environment for a massive congregation of family, first responders and civilians to assemble and mourn a fallen firefighter during a global pandemic.

We applied a myriad of safety protocols learned through previous sporting event successes and case studies. To mitigate contact, an intimate memorial was held indoors for the immediate family. Simultaneously, the service was live-streamed to a large video system (and broadcast on FM frequency for media) outside the funeral home where hundreds of dignitaries, first responders and community members assembled at a safe distance. Venue signage reiterated mask and distance protocols and provided direction to attendees. Using detailed maps and calculated public safety efforts, we coordinated parking and a funeral procession for several hundred fire apparatus and private vehicles. Refreshments were provided for the day-long event.

Our efforts provided a dignified ritual for 500+ attendees, relieving the undertaking from those closest to the departed. Coordinating directly with the agency in charge allowed for a seamless program, due to efficient communication among event staff, funeral home personnel, vendors, family and visitors. 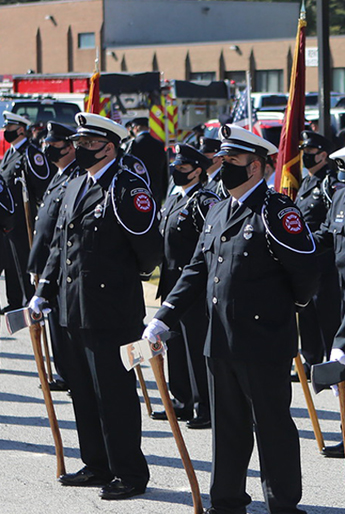 Improvise During A Pandemic

Innovate around a local triathlon cancelled due to a pandemic.

We launched a virtual edition of the sporting event which embraced the deeply personal, grassroots flavor of the original event while also creating new opportunities for non-traditional participants. We dubbed it “Leon’s Mom’s Virtual Duathlon” and motivated individuals to see their names atop her refrigerator once finishing their challenge. We offered a nominal entry fee for one of five biking and running events, allowing people to engage in physical activity with social distancing guidelines in mind. We integrated an upgrade offer for those who wanted to commemorate the experience with race memorabilia, and we developed an opt-in donation option to support our local charity partner.

Through an integrated marketing plan, we generated hundreds of participants and reached 57,000 organic social impressions. We also created compelling opportunities to stay connected with our customers, integrate with our sponsors, reach non-traditional participants, and support a long-standing charity partner.

While the multisport industry was growing in popularity, year-over-year registration for a major market triathlon was in decline, primarily from a lack of new participants.

We connected with local influencers, training groups, and veteran participants to better understand the marketplace. Based on the market research, we recognized a growing fear of swimming in Lake Michigan and a direct lack of swim-related programming. As a result, we created free, organized open water swim training events for the entire community. Local triathlon clubs and swim experts were recruited as volunteer coaches and provided small-group swimming lessons. Local breweries and restaurants were recruited to provide post-event social opportunities.

The swim clinics became the largest single feeder of first-time participants into the triathlon weekend, contributing to a 30% growth in new triathletes. More than 75 coaches supported 12,000 swimmers between 2012 and 2019, including 9,000 first-time open water swimmers. The swim clinics became one of the largest swim programs in the nation, selling-out at 1,000 swimmers and generating more than $100,000 in charitable donations.

We immediately assembled key, internal operations, finance, and communications team members, as well as key stakeholders from city agencies, to identify and evaluate a myriad of contingency plans. We then created and implemented a systematic, emergency event cancellation process, which included a novel approach to sporting event cancellation practices and a major network press conference.

Within 72 hours, we achieved more than 5 billion global media impressions and supportive marks from 98% of participants. The positive brand impressions led to a sold-out event capacity the following year.